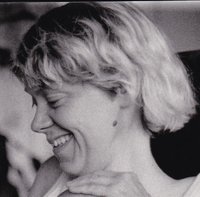 Sandra will also be sadly missed by a host of good friends, colleagues and attendants. Among her most beloved are Rebecca Garett, Rebecca Barry, Louis George, Ann Clifford and Mary Belcourt.

After Sandra’s initial diagnosis of what was to become known as SMA Type 2, doctors predicted she was unlikely to live beyond the age of twelve. Little did anyone then know that Sandra was to become a life-long advocate for people with disabilities. Sandra is quoted as saying, “The first subversive thing I ever did was live.”

Sandra briefly attended a local school before the Ottawa Board of Education decided it would be better to provide schooling at home. So from 1961-64, a teacher met with Sandra at home to provide instruction for four hours per week.

In 1964 when Sandra was eleven years old, she was admitted to Bloorview in Toronto. She often recalls her first impression of Bloorview when she read a plaque in the lobby for “The Home for Incurable Children.” All of a sudden, her immediate family grew to include 47 more kids. She took all of them under her wing, forming their first ever “Students’ Council” normalizing the role of all the children living there as students who are learning like any other kid their age, not as patients who were sick.

This was probably the beginning of Sandra’s life-long journey to figuring out how to succeed in a hostile social environment that did not take the needs of people with disabilities into account. Her experience of institutionalization helped her relate to the Calls to Action by the Truth and Reconciliation Commission, which she committed to at the end of her life.

As a high school student at Northern Secondary, she aspired to be a writer, journalist or artist. Sandra eventually settled on social work which seemed to her to be the most practical and dependable choice. So in 1972, Sandra left Bloorview, enrolled in Ryerson’s School of Social Work and graduated in 1978. But Sandra’s passion for the arts never dimmed.

Sandra began her working career as a social worker for the Ontario government where she worked for eight years as a social worker and policy analyst in every variety of roles including the Ministry of Labour’s Handicapped Employment Program.

Sandra envisioned people with disabilities leading independent lives, supported by advice from their peers and physical supports in the community – from affordable, accessible housing to attendant services. This vision was her impetus for founding the Centre for Independent Living in Toronto (CILT). Sandra became its first Executive Director in 1976. More than once in the early days, she put her own salary payments on hold to make ends meet until CILT became firmly established. Sandra charted a course for CILT which has lasted to the present day.

Sandra returned to the Ontario government for a time in 1989 as the Manager of the Centre for Disability and Work in the Ministry of Labour. After a brief leave of absence, during which she worked as the Research Director for the Canadian Association of Independent Living Centres in Ottawa, she returned to government once again as a senior policy analyst for disability issues and was eventually appointed the Senior Manager, Disability Issues at the Ministry of Citizenship, Culture and Recreation.

Sandra left the Ontario government in 1999 and briefly worked for the Foundation on Independent Living. She returned to CILT in 2000 where she resumed her role as its Executive Director until she retired in 2019.

Among Sandra’s proudest achievements at CILT were her contributions to the independent living philosophy and the role she played in establishing Ontario’s Direct Funding (DF) Program. The Direct Funding Program, now over 25 years old, enables people with disabilities to live in the community on their own terms by hiring their own attendants. More than 1000 people owe their freedom to the fruits of this work.

Sandra was one of the original independent living visionaries in Canada who moved the IL philosophy forward. During her time at CILT, Sandra’s influence was significant within the independent living community in Toronto, across Ontario and throughout Canada.

No matter how busy she was advocating, organizing and connecting like-minded people to the various projects in support of independent living, she always found time to listen. More than once she rescued a friend from the street by giving them a place to stay while they were in transition.

Sandra had a different way of viewing a problem from a system perspective. Her enthusiasm was infectious. Her clarity in dealing with systemic problems was nothing short of brilliance. As her friend or colleague, she would usually take your side but if not, Sandra was able to illuminate the heart of the matter. She was collaborative, thoughtful and a true leader.

Sandra’s family is organizing a celebration of her life to be held at a future date. Details will be posted on Sandra’s Facebook page. https://www.facebook.com/sandra.carpenter.9406

Sandra’s family is organizing a celebration of her life to be held at a future date. Details will be posted on Sandra’s Facebook page. https://www.facebook.com/sandra.carpenter.9406

We inivite you to share storied, photos and sentiments of her life here at her memorial web page.