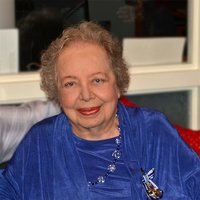 "We know that music is a basic need for human survival. It is one of the ways we make sense of our lives.” Fran Herman

Today we celebrate the life of Fran Herman who passed away peacefully in her sleep at home on the morning of October 19, 2020 at the age of 93. She was an accomplished pianist, pioneer of Music Therapy, advocate for children and youth, and recipient of the Governor General's Meritorious Award.

Fran was a Canadian pioneer of Music Therapy. She was a past-President of the Canadian Association of MusicTherapists, and for 15 years, she served on the Canadian Music Therapy Fund’s Board of Directors. She was heavily involved in all aspects of fundraising, including mobilizing the Canadian music industry to help support music therapy across the country. In 2001, one of Fran’s proudest accomplishments was opening the doors in Toronto to the first Music Therapy Centre in Canada.

In 1962, Fran adapted and directed the film “The Emperor’s Nightingale”. This marked the first time that someone created Wheelchair Theatre, a drama-dance performance advocating for accessibility in the creative arts.  This was documented by the CBC and became internationally known.

Fran's creative inner child had a marvelous sense of play and there were elements of whimsy in all she did.   Her work at Holland Bloorview Hospital eventually evolved into developing her vision, a creative arts department within the hospital.  In the late 1980s, Fran collaborated with her colleague James Smith and co-wrote two books based on their work, titled Accentuate the Positive and  Creatability.

Fran had many different roles, however, the most important role to Fran was her role as a wife and mother.  As a wife, she was a best friend. As a mother, she was inspired.

Despite the surgeries and pain Eve endured as a child with scoliosis, Eve's childhood was full of play, art, richness, creativity, music and meaning. That is why Fran was the perfect mother for Eve.

Fran was born Frances Korson in Cobalt, Ontario on August 1, 1927.  As a young girl she was gifted with great musical talent, winning contests as an accomplished pianist. After her move to Toronto in 1951, she became one of Toronto’s leading piano teachers with a large array of students. In 1956, she was called upon to teach piano to a special needs child. This was the birth of her dedication to children and youth, which spanned her lifetime.

From that time on, Fran dedicated her life to the advocacy of music therapy as a mainstay in places such as hospitals and care homes across Canada and around the world. "For some, it takes a village to make a difference. In the case of Fran, it took one."   Jennifer Buchanan, CAMT Executive Director

Fran was predeceased by her cherished husband of 45 years, Carl Joseph Herman, on September 4, 2007. Her memory will be treasured by her darling daughter Eve Sari Herman (her partner, Angelo Guaragna), her wonderful grandson Christopher Kubinec, her two devoted sisters, Norma Hoffman and Evelyn Druker, her step sons, Theodore Herman (his partner Alma) and Robert Herman (wife Shelley Spiegel) and many family, friends, and colleagues.

Fran and her husband Carl created a home that was a haven and sanctuary for many. There was a magic about the Herman dinner table. Fran’s great meals were consumed. Ideas and jokes were shared.  Laughter and love, a constant.  People came back...  and came back... and came back…

A request from Fran’s daughter, Eve:

My parents were both wonderful storytellers. Stories were a big part of their lives, as they were to all who heard them - and often heard them more than once! (wink!)

Fran and Carl are no longer here to tell their stories, but now you can tell them.  Please support and continue the Herman tradition by writing a story... maybe two... maybe three...   about a moment or any insights you can recall.  You'll be helping us create a memory book which we will all get to cherish for years to come.

In celebration of Fran’s life, donations can be made to the Fran Herman Memorial Fund. Please explore the memorial web page or visit:

The Canadian Music Therapy Fund www.musictherapyfund.ca. These can be made via the Donations option on her web page.