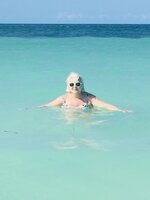 A few days before my mother Janet passed away, we had a conversation about our lives together and how much we meant to each other as mother and daughter. I told her all the things I had been meaning to say, about how much I loved her, and how much her devoted parenting made me the person I am today. She told me that being my mother was the most important role of her life, how proud she was of all I had accomplished, and that I was the best daughter she could have hoped for. At the end of our talk, Ma gave me two directives to follow after she was gone: firstly, Be Kind to Others, and secondly Live With Joy. During her 68 years on this Earth, she tried to live by these guiding principles, and within the last decade, she became a devout Christian; her belief in God carried her through many difficult times, including her initial cancer diagnosis in 2015, and again when it spread in 2017. Her prayers were answered, and she was restored to good health in what we truly believed was a miracle.

I didn't realize it then, but those years of her remission were some of our best times together, most notably our second trip to Cuba in 2019; she had taken me on our first vacation to the island nation in 1992, and fell in love with the beauty of the tropical land and its kind, caring people. Going back was a return to paradise, and we spent hours floating in the turquoise sea, buoyed by the gentle salty waves. We felt tiny in the vastness of the ocean, yet safe as if returning to the womb of the Earth itself. Ma said she thought that this was what Heaven was going to be like, and I believe that is one of the first places her spirit returned to after she passed away: on November 6th, 2021, at 6:30pm, following the most spectacular sunset, it seemed like Heaven was beckoning her, and we spent her final moments together in complete peace and calm.

Free of the ailing body and cancer that had again returned, her soul set out on a journey to reunite with her Maker. I have no doubt that she is in Heaven, communing with the souls that preceded her, swimming in the oceans of the universe. I miss her so very much: I miss her laugh as we watched Classic movies on TCM, I miss cooking yummy meals together in our tiny kitchen, I miss the warmth of her hugs, and the sound of her voice when she called me Jadie. Ma was my best friend for all of my 41 years as her daughter, and I thank her for giving me the gift of life, one that was full of love and joy and laughter and learning.

A few days after she died, I came across a note on her dresser, which she'd written onto the back of a pad of paper: "Farewell in Spanish derives from the meaning 'May you be commended to God. Adios." So, Adios my dear Ma, until our souls are reunited, and we dance on the beach together again.

As well as her dear daughter, Jada Skelly (Matthew Bronson), Janet is survived by her sister, Doreen Skelly;
her sister, Margaret Skelly (late John Saso); her sister, Mary Catherine Skelly; her brother, Gregory Skelly
(Jody Spegel); her sister, Carolyn Skelly; her foster brother, James Chamberlain; her aunt,
Patricia Shalapata; and many cousins, nieces, nephews and loved ones who remember Janet
for the wonderful person she has always been.

We will miss you, Janet, until we meet again.

Please note: We will be holding a Celebration of Life for Janet in Spring 2022 for close family and friends, with details to follow in the new year. In the meantime, please feel free to add your own stories, favourite memories, and photos of Janet here.