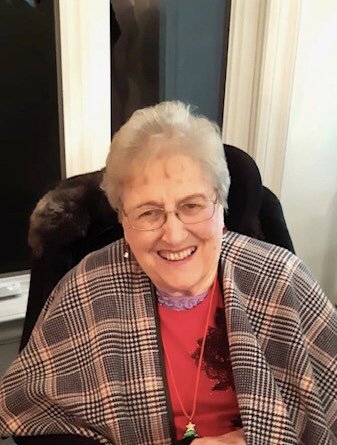 With sadness in our hearts we announce the passing of Clara (Clare) Paul on March 13, 2020, at the age of 91, in Mississauga.

As the Toronto Star noted in their 2004 article about Clare, it is "Amazing what one woman can do".  Born in Hamilton in 1928, Clare and her five siblings (Palma, Nellie, Lora, Tony, Frances) were raised by their mother Mary Di Renzo, in a tiny house on Biggar Avenue in that city's unfashionable north end.  With the help of the local Relief organization and a backyard full of vegetables and fruit, they all made it through the depression years in relatively good health.  At the age of 13, Clare had to leave school as the family needed the income.  She worked up the street from home at the Cotton Factory on Sherman Avenue.  Each day she would return home with fluffs of cotton all over her clothes, in her eyes, ears, hair, nose and mouth.  Not one to marinate for long in an unpleasant situation, she quickly jumped ship to Aerovox to work on the assembly line for the war effort.  She, as did all of her siblings, brought every penny she earned to their mother to contribute to household expenses.

During the war years, Clare was an avid "Jitterbug-er" and roller-skating enthusiast, appearing in many shows and competitions.  Being an accomplished seamstress, she made all of her own costumes and clothing, including hats and handbags.  Her love of sewing and dancing carried on throughout her life.  Clare was always at the hub of social activities and gatherings.  After they started working she and her sisters added a sub-floor and walls to their mother's mud cellar and papered the raw wood with magazine photos of movie stars and singing idols.  They bought a used gramophone, built a dance floor and began inviting their friends in.   Her social ethic, generosity and hospitality skills,  developed at a young age, set the foundation for a lifetime of good friends and good times.  Clare always made sure that nobody was left out.

In 1949 Clare Mary met and married Joseph Paul, artist and business owner, and the two moved into the tiny attic space of Maria Del Col; friend and much-admired cook for large Italian weddings.  Thus began Clare's mentorship in Italian cuisine.  After daughter Patricia was born in 1951,  they answered the siren call of the big city and moved to Toronto where Michael (1955), Lori (1957) and Joseph (1961) joined the family.  Joe built Clare her dream home on a large lot in a semirural area outside of the small town of Islington (now in the heart of Etobicoke).  The couple quickly made a circle of friends in their new neighbourhood, becoming involved in St. Gregory's Parish and school, bowling league, baseball team, Knights of Columbus, PTA, Italian Immigrant Aid Society and Canadian-Italian Businessmen's Association.

Life was good indeed... until 1962 when Joe, at the age of 42, suffered a massive heart attack.  He survived the attack and was able to return home after being hospitalized for six months but his abilities were severely diminished.  He was to be in and out of hospital for the next five years.  Clare, surely in shock but with no time for indulgence, quickly rallied to help Joe establish and operate their fledgeling insurance agency... in addition to looking after the household, four children, a failing husband, moving house and landing whatever part-time jobs she could muster to help the family coffers, (including the Alterations Dept. at Sears and cocktail waitress at Cousin Don's Saloon).  Ultimately Clare would find herself learning the insurance business and taking over all the duties from Joe.  Sadly, it was also during this period that the family lost their home due to financial constraints.

By 1967, they were in a position to buy another family home.  This time it was in the small town of Cooksville (part of present-day Mississauga) in a brand new subdivision surrounded by farms and apple orchards.  As fate would have it, within three months of moving to this new home, Joe passed away.  He was 48 years old.  Clare was 39.

Following a few years of sadness and turmoil, Clare pulled it all together, reinventing herself and her life.  She organized the help of friends and neighbours to construct an inground swimming pool in the backyard of her home.  In addition to garnering the admiration of all those around her, this effort resulted in the first newspaper article about this dynamic and determined woman circa 1970.

Throughout the 1970's she made new friends (also staying close to her special old ones - or "gold ones" as she called them), joined the church singles group, became active in PWP (Parents Without Partners) while her children were young and continued to run her insurance agency.  In the early '80s, after most of her children were grown and gone, Clare decided that she had had enough of the insurance business.  Determined as ever, she studied and wrote for her real estate license and joined Century 21 in Port Credit, where she stayed until she retired.

Clare had a strong sense of family.  The 1980s and '90s saw the addition of eight grandchildren:  Matt, Rob, Sarah, Nicky, Ashley, Jeff, Mike and Christina.  Watching her grandchildren grow meant the world to her.  Those years were also peppered with some business success, travel, dancing, socializing, family gatherings and a penchant for "garage sale-ing",   She became known for her practical and corny jokes (some of which were off-colour and entirely over her head), pool parties, corn roasts, barbeques, fund-raisers, Christmas parties, Valentine parties, St. Patrick's Day parties, Easter parties and her own mother's annual birthday party in June (whether her mum decided to attend or not).

In the past eight years, Clare had the good fortune of welcoming a new generation of family members:  great-grandchildren Max, Freya, Avery, Alex, Maverick and Aiden.   Her most recent years were spent in a retirement home where, true to form, she did her level best to participate in all the activities.  Clare was happy and pleased with her long and rich life.  But she was tired.

Now we must say goodbye to a true original.  Clare, Mom, Gramma, Greatgranny, Auntie Clare, Cousin Clare...the girl from Biggar Avenue...we love you and we miss you so very much.  Thank you for a lifetime of memories.

We look forward to holding a celebration of Clare's life at St. Dominic's Church, as soon as possible.  Please check back to this site for details.

In light of the current emergency situation, a Funeral Mass and Celebration of Life will be held at St. Dominic’s Church, Mississauga, at future date.

We invite you to share memories, photos and sentiments of her life here as it is enhanced over the next day.

Donations to her favourite charity, Operation Smile can be made using the link on her home page.