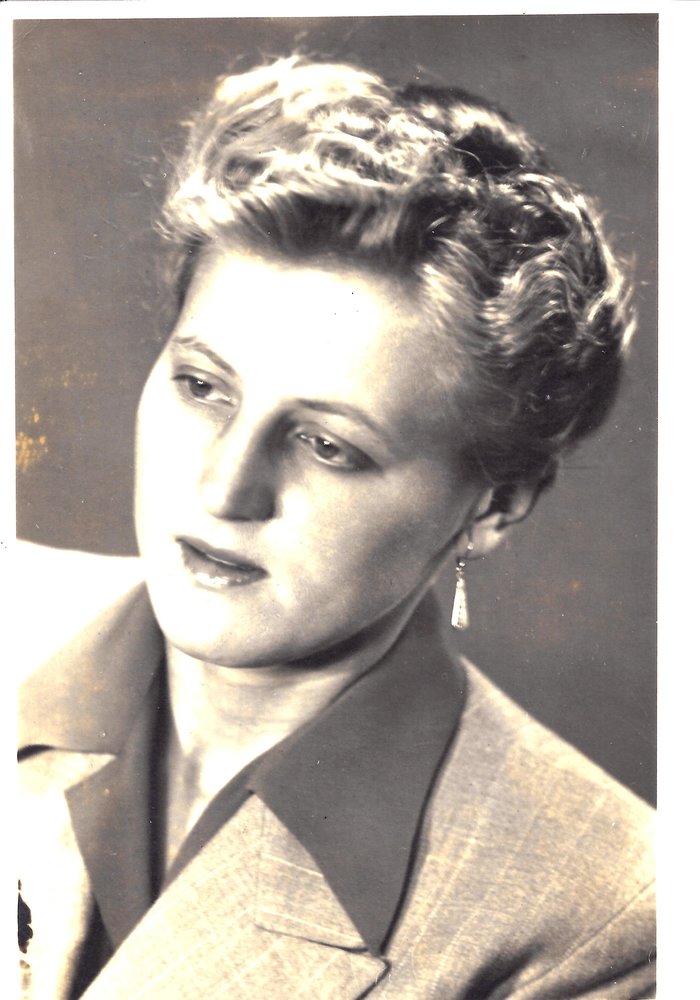 Loving wife of the late Imre Tanko, beloved mother of David Tanko and his wife Lesley Varga, and cherished grandmother to Marcus and Maxwell Tanko, forever their Omi!

Franciska’s life is a story told in three chapters, each taking place on a different continent over ten decades, in two centuries.

Born in Elek Hungary, daughter of Joseph Kastner and Louisa (nee Mahler) Kastner, she was their only child after the death of two infant siblings. Franciksa possessed uniquely beautiful handwriting that derived from the old German gothic script she was taught in school. She was raised bi-lingual in the German and Hungarian cultures and enjoyed school, friends, and sport in the quaint town on the south-eastern plains of Hungary. Elek was a culturally German town, populated by the Schwaben or Schwabs, the colloquial name for the German settlers who immigrated to Hungary and Romania 200 years before during Habsburg rule.

The closing days of World War II prematurely ended her final year at teachers college and she was interned by advancing Soviet forces and sent to Krivoy Rog Ukraine as forced labour. Thousands of others –including women and children - were also taken as slave labourers and many did not survive. After two and half years of severe deprivation she returned to find strangers living in her home; her parents had been expelled to Germany by the communists. She made her way with a group of fellow refugees through Austria –being arrested by the border police while crossing through a forest at night- and was released by a kind judge with a mock-stern warning. She eventually re-united with her parents in Heidelberg, Germany. Her father died suddenly days after their re-union.

Franciska never let her misfortunes define her nor did she hold animosity to anyone. She maintained her positive and polite demeanor through her entire life and was liked by everyone she encountered.

Many of the Elek families who were forced to flee Hungary settled In Heidelberg which is where Franciska met her husband, Imre Tanko, also a refugee from communism. Imre -despite ending the war as a prisoner of the American’s - was now working for the U.S. Third Army. They married on October 1st 1949. Many happy days and years were to follow.

Post war Germany was devastated and the looming cold war threatened the brief peace in Europe. Although they resided in Germany, they were both officially stateless. The young couple were tired of war, deprivation and political instability. They were offered free passage to the U.S. but chose to follow Imre’s former commander in the Royal Hungarian Air Force, Victor Levay, to Australia. Many other friends left for Australia as well as Canada and the U.S.

They settled in Sydney; Australia was sunny, welcoming and stable, in sharp contrast to post-war Europe. They made many friends. Franciska was a gifted with excellent language skills and soon mastered perfect grammatical English –always with a slight German accent.

Franciska worked in a pharmaceutical plant where her colleagues gave her a stunning crystal vase at her baby shower. Franciska and Imre’s only child, David, was born in 1958 and Franciska became a devoted mother for the rest of her life.

These were halcyon years of freedom, hard work, prosperity and great friendships with established Australians and new Australians from all corners of Europe. Franciska and Imre adopted many of the Australia’s customs, phrases and its cuisine, most often from British roots, which made dinner a multi-cultural affair in their household: it wasn’t unusual to have beef wellington and yorkshire pudding or lamb with mint jelly one night followed the next by their more familiar chicken paprikash or wiener schnitzel! Franciska was an incredible cook and had also mastered the delicate pastries and cakes of Austro-Hungary, which never ceased to amaze dinner guests!

Australia was an egalitarian society, far removed from the turmoils of Europe. Imre was a skilled tradesman -a master mechanic and welder- and a hard worker. They built a beautiful new house on a large lot close to the ocean in Cronulla, a suburb of Sydney. They started a small trucking company, though this required Imre to be on the road on long trips, often driving across the Australia’s hot and unforgiving interior. The heat was foreign to Imre –this is before air conditioning- and he missed the four seasons. After seventeen years in Australia they decided to move to Canada.

They lived a year in each of Vancouver and Toronto and then settled in London, Ontario, where there were, coincidently, many families from Franciska’s hometown of Elek. They rekindled long ago friendships that they had made as a young couple in Heidelberg after the war. The “Elekers” were the core of the community they embraced in London along with many other friends and neighbors.

In London, Imre worked hard and Franciska looked after the house and David. They had saved some money and bought several investment properties. Then they built a beautiful house over-looking he skyline of London. Life was good. In 1971 they travelled to Europe to visit Franciska’s mother and

extended family in Germany and Imre’s family in Transylvania in what is now Romania. It seemed as if life had come full circle in some fashion.

In 1975 Franciska bought a silver Chevy Camaro Sport, which she would drive for 25 years…though never in the winter. Invariably she couldn’t drive it anywhere without a young man inquiring if it was for sale.

As David grew into his teens he found his own friends and interests and Fransiska and Imre would use their free time to visit friends and discover their province of Ontario, once going as far as James Bay.

David would start university. Midway through David’s bachelor’s studies, in 1981, Imre would die suddenly, leaving both Franciska and David heart-broken. Franciska would support David through the rest of his undergraduate studies and David committed to being there for his mother for the rest of her life. Rarely would a day go by without David calling his mother. David would ultimately find a prosperous career in finance primarily in Toronto, but also in Vancouver and New York.

Franciska would travel to Europe each year or two with her friends and would go on tours of the classic historic sites in Paris, Rome, Geneva, Budapest and elsewhere. Salzburg, Austria and the surrounding Alps was her favourite place and she visited there several times. There were a few visits back to Elek, once for a combined class re-union and the gala two hundred seventy fifth anniversary of the Schwaben migration.

As David pursued his career, Franciska would keep the house and gardens of the large home in London in pristine condition, which was no small task. Franciska was an avid and talented gardener. When David married Lesley, Franciska would sell the house and move to Toronto to be near them and her new grandsons, Marcus and Maxwell, who were born two years apart. The boys worshipped their Omi and her love for them was infinite. When they were toddlers, she would wheel them in their strollers down to the lake and along the boardwalk for hours near their home in Toronto’s Beaches neighborhood.

Franciska was embraced by both Lesley and her family, the Vargas, who resided in Peterborough. Lesley and Franciska became very close and Lesley’s mother Pat and Franciska would become great friends. Lesley and David built a large cottage north of Peterborough in the Kawartha Highlands and Omi would spend days and weeks enjoying the company of her grandsons and the extended family, on the deck in the summer and in front of a roaring fire in the winter.

Franciska loved Canada, its beauty, its freedoms and its opportunity.

Franciska, despite some age related health issues, lived independently into her mid 90s, proud to use only a cane rather than a walker. Invariably, when David or Lesley would call or visit, Franciska would always ask “how are the boys?” She loved them and followed their progress through life intently, as they became fine young men.

Franciska had the privilege of being a patient of Dr. Samir Sinha, a pre-eminent geriatrician and head of the Aging and Geriatrics program at Mount Sinai Hospital and benefited greatly from Canada’s superb healthcare system. In her last 6 months she was admitted to Michael Garron Hospital and then spent her final few months residing at Houses of Providence, just minutes from David, Lesleyand her beloved grandsons…still sharp, witty and engaged with her family’s life. Just days before her passing she sat outside in the summer sun with David and he read her the commemorative speech he was going to give graveside in London on July 3rd, to celebrate Imre’s 100th birthday anniversary. Franciska died in her sleep that morning.

For those who wish to make a commemorative donation, Franciska greatly benefitted from the care provided by Dr. Sinha and the Healthy Aging and Geriatrics program at Mount Sinai Hospital. Donations can be made to The Geriatric Research Fund at The Sinai Health Foundation.

or by using the Donations tab on this page, above.

Please share your memories, photos and sentiments of Franciska's life here at her memorial web page.