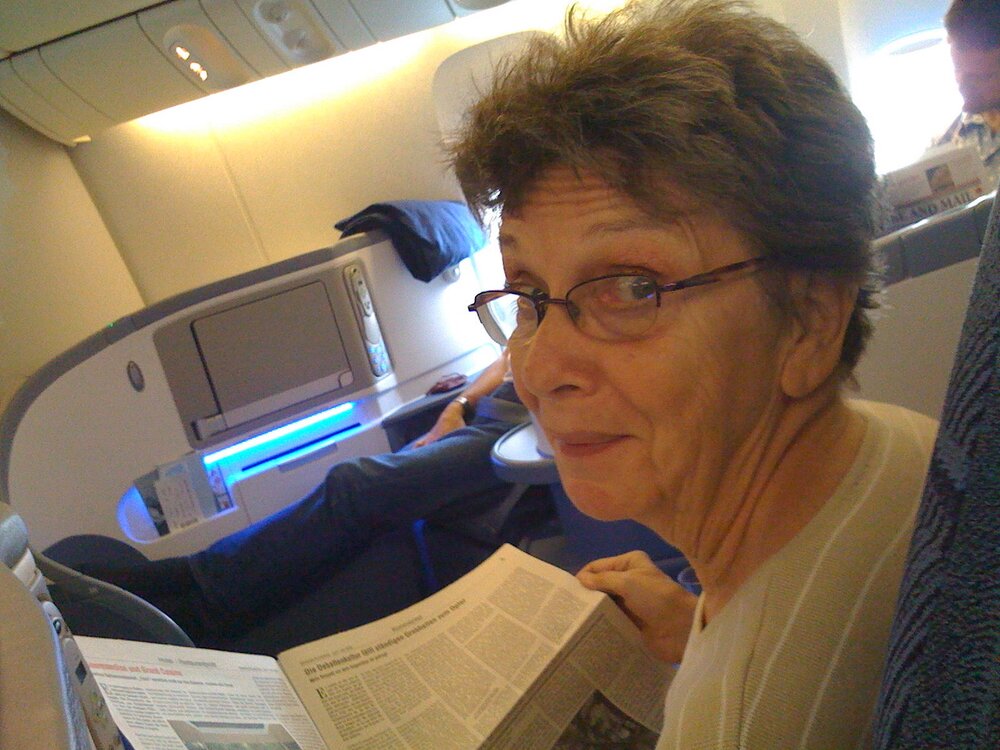 Carolyn Phyllis Cole was born on January 2, 1943 in Belleville, Ontario to Elva Mae Rawson and Arthur Cole (who was away in Europe serving in the Film & Photo Corps of the Canadian Armed Forces at the time.)

After Art’s return, the family of three moved to Toronto’s East York. Three became four with younger sister, Kathryn’s, birth in 1947. Despite the four plus years between them, the Cole sisters were best friends from the start, sharing far more than a bedroom until their move to Leaside in 1955. Under Carolyn’s leadership, the sisters explored a wide range of interests from reading to painting, to breeding fish in the basement aquarium. Their beloved menagerie consisted of old cocker spaniel, Lucky, Twink the cat, Popeye the budgie, and was rounded out by various collections of tadpoles, bugs, turtles and spiders. Carolyn’s flare for the dramatic led to poetry readings, high tea ceremonies, and more than a few science and photography experiments resulting in dubious successes but no end of hilarity. Carolyn’s response whenever Kath worried about the probability that they would meet with parental disapproval? “Yes, we will. But think of all the fun we’ll have in the meantime!”

She began her career at age twelve, writing children’s book reviews for the Toronto Telegram. After an awkward and unremarkable time at Leaside High School in Toronto, she spent four years at Ryerson’s School of Journalism.  Her classmates would eventually go on to reshape the media business in Canada and beyond. It’s at Ryerson that she met her true love, Radio and Television Arts student Philip Jackson. Post-graduation, and after a perfunctory wait, Philip finally proposed marriage and in 1966 Carolyn moved to Jamaica to start a new life. It was truly the first of her grand and wonderful adventures, and no small challenge — an interracial marriage in the maelstrom that was the sixties provoked all manner of ugly reaction from those around her. Undeterred, Carolyn firmly established herself in the Jamaican arts and business communities, owning and operating the very successful Simpatico Music Service (think Muzak before there was Muzak. But with actual songs licensed from actual labels! If you heard Stevie Wonder songs being played in a department store in 1970s Kingston, you are familiar with her work.) In 1968 she became a mother upon the birth of her son, Christopher.

Carolyn treasured the good years in Jamaica, but in 1973, placing her son’s safety above all else, made the difficult decision to leave Jamaica with Christopher. They landed in Toronto, received by Elva, Art, and her sister, Kath, and made a life in the very neighbourhood of her youth. She resumed her newspaper career, joining the Sunday magazine staff at the very young Toronto Sun. Carolyn moved on to become assistant travel editor, a role perfectly suited to her curiosity, fearlessness, and worldliness. Being a travel writer and single working parent meant that Carolyn circled the globe, very often with Chris in tow. Carolyn’s clippings from her Sun years reveal her self-effacing humour, insatiable thirst for knowledge, and her superb ability to connect with people.  To read her was to want to travel. Happily, at the Sun, she was reunited with her best pal from journalism school, Sun entertainment editor, Kathleen Brooks. “Ms. Brooks”, as she was and is known, would remain the most loyal of friends to Carolyn through all that would come after.

After leaving the Sun, Carolyn moved to enRoute (Air Canada) magazine, first as managing editor, then as editor. It was during this time that she served as Canadian chapter chair of the Society of American Travel Writers (SATW), reflecting the admiration of her peers. Her SATW work was very important to her; travel ethics, industry relations, government relations, women’s travel — she worked hard to bring integrity to the process by which column inches are made.

In the early nineties, she received an offer from a non-fiction book packager in Montreal, St. Remy Press, to be their managing editor. (Happily, her son Chris was already working at St. Remy’s New York City office.) In a career that would produce no shortage of highlights, the St. Remy years were Carolyn’s own highlight; the work of which she was most proud.

Hundreds of best-selling illustrated non-fiction books were produced by St. Remy, all under Carolyn’s steady hand.  Carolyn could move from editing travel copy at one moment to approving step-by-step images of garage door repair at another. She could move TV stars to hysterics over an ABA dinner in Miami, then fly home to talk with an archaeologist about why it’s “Maya”, not “Mayan”. She could tell you to break-out the 1972 Miami Dolphins schedule (with won-lost record) into a sidebar and then go into a budget meeting and find the money for that fifth colour the book so desperately needs.

It’s one thing to simply edit under the broad umbrella of “non-fiction” as part of a process, but it’s quite another to lead a small army through every painstaking second of giving birth to a book, from proposal to bindery. It was magnificent to see, time and time and time again. She made every book better, and everyone making those books better.

Carolyn often marvelled in retrospect at the sheer, improbable scale of what was accomplished in that time. An inveterate romantic, she also proudly claimed sole credit for two (still-standing!) marriages and those lovely children. Those who worked at St. Remy were always in her heart.

Carolyn moved back to Toronto after St. Remy’s demise and, after much freelancing, her last position before retirement was managing editor at feminist publisher, Second Story Press. The focus on women’s issues and social justice titles, many of which were for young readers, was also a point of pride for Carolyn. SSP’s Margie Wolfe ranked Carolyn’s ability well above her challenges (by this time, Parkinson’s was well into its steady march) and for years provided an understanding and flexible environment that allowed Carolyn continue her craft when the regular 9-to-5 just wasn’t possible anymore. And craft she did; awards won, authors made better, and countless great books in kids’ hands. Not bad for an old lady.

Carolyn truly retired a scant two years ago, only when operating a keyboard became impossible. She was a force in the publishing industry, as an author, editor, publisher, and mentor.

Carolyn adored her family; she was its rock, and keeper of its history.

In 1999, Chris’ daughter Maxine was born in the Philippines. Though distances great and relationships complex, Carolyn got her first chance to flex her grandmother muscle when Maxine was two-years old and never stopped. Carolyn and Maxine got to share their own grand adventures — from New Brunswick to Osaka to Montenegro and beyond — and she treasured every one of those moments. She was fiercely proud of Maxine for forging her own path on the way to medical school, and what comes next.

Carolyn also remained dedicated to her sister Kath, and fortunately they spent the last decade living in the same condo building — so there was no shortage of quality time! She was proud as punch of her sister’s own rise through the ranks of Canadian children’s publishing. And she was in awe of Kath’s selflessness in adopting and raising her two daughters, and now in raising her own grandson. She’ll never stop worrying about her little sister, or stop loving her.

Her son, Christopher, wore the badge Mama’s Boy with pride, and if you couldn’t see it for some reason, he’d tell you all about it. Their special relationship was evident to all who knew Carolyn; he was devoted to her. Recognizing that Carolyn had given him a lifetime of adventure, he delighted in returning the favour as they toured the world by walker and wheelchair in her later years. He partnered with Carolyn in a relentless pursuit to understanding Parkinson’s Disease, attending four World Parkinson’s Congresses with her. Each of her joys and pains he felt to his very core — there’s a big gaping hole in his chest where his heart was, just like Willie Nelson said. In a very late coming-of-senses, Chris married Julie Huguet in a summer 2021 wedding that soothed Carolyn's soul. She was beyond thrilled.

Authors and editors far and wide will surely miss her, as will her friends. The Publishing Ladies, The Voices of Hope Choir, dear departed national treasure Grant Munro, the aforementioned Ms. Brooks, Maggie and Gerry, Dan… her circle of friends was smarter and far more interesting than one could ever conjure, and provided her with so much joy. She treasured every moment with them.

Carolyn relied on personal support workers to continue living at home as Parkinson’s Disease and Ehlers-Danlos Syndrome ravaged her body. She was as outraged by their working conditions as she was grateful for their love and compassion in spite of it all. PSWs Almaz, Indira, and Mary Grace are strong women for whom Carolyn had towering respect and unending gratitude.

Thanks to the exemplary staff at North York General Hospital’s Critical Care and Emergency units for their professionalism and kindness.

A private, eco-friendly burial will take place in the spring in Prince Edward County where she was born, and a celebration of a life fully lived will follow later in the year.

In lieu of flowers, donations may be made in Carolyn’s memory to Operation Smile Canada or The Michael J. Fox Foundation.

(This obit would have been so much better if only Carolyn had been around to clean it up.  Apropos, no?)

Sing along with a few of Carolyn’s favourites…

Into the Mystic - Van Morrison

You Can Get It If You Really Want - Jimmy Cliff

You Are Too Beautiful - John Coltrane and Johnny Hartman

You Are the Sunshine of My Life - Stevie Wonder

You Are My Sunshine - Ray Charles

The Makings of You - Curtis Mayfield

The First Time Ever I Saw Your Face - Roberta Flack

Please share your memories, photos and sentiments of Carolyn's life here at her memorial web page.