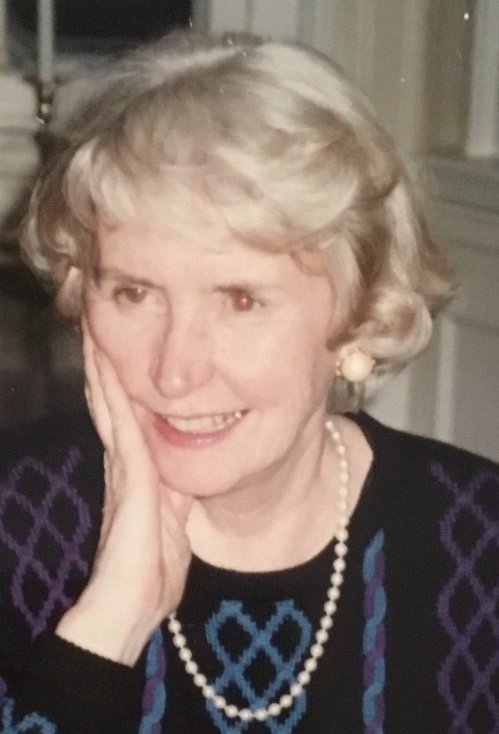 Patsy was predeceased by her parents Lester and Maryon Pearson, and her brother Geoffrey.

Even in her last years, when dementia had taken so much from her, Patricia endeared herself to everyone she encountered, with her gentle spirit and legendary smile. She astounded her family with her resilience, and entertained us with her snappy come-backs. “How’s it going, Mum?” “It’s not really going. It’s pretty much stopped.”

In her youth, as a diplomat’s daughter, Patricia endured many moves, to many cities, countries, and boarding schools. It didn’t suit her temperament. She dreamed of having one home and lots of kids, and staying put.

After graduating in 1950 from Victoria College, University of Toronto (like her mother, father, and grandfather before her), she embarked upon that dream. She married Walter Hannah, and they settled with 5 kids in a house in Toronto, and stayed put for 20 years.

Mum ran a bit of a chaotic household, full of love and acceptance and perhaps fewer rules than was wise. Our friends loved coming over, for homemade cookies and Mrs. Hannah’s respectful listening ear.

In the 70s she volunteered for Planned Parenthood and the old ARF, now CAMH. She offered her compassionate soul, wanting to help troubled young people especially. She also resumed her art, long a love of hers, and audited Northrop Frye’s U. of T. lectures. Having had 5 kids hadn’t dumbed her down terminally.

Then, in middle-age, Patricia struck out on her own. She bought her own house, and for the next 20 years she travelled the world (this time on her terms), cherished friendships new and old, bought seasons tickets to the theatre and symphony and endless Canadian books; she was ever a supporter of Canadian artists, actors, and writers.

After many happy years at our Hannah cottage in Muskoka, she rented cottages on Stoney Lake. She instilled in her family a love of nature.

Mum made her little house on Gormley Ave. a warm gathering-place for her children and ever-growing number of grandchildren, and our assorted partners and friends. She hosted Hallowe’ens, Christmases, birthdays, evenings of charades. Her family gave her joy.

Patricia was her father’s daughter, kind-hearted, cheery, and temperate; moderation in all things was her credo. (She never understood why not one of her children shared it!) Like her mother, she was a fair and wise judge of character, who spoke up when she saw wrong.

In 2011, as her dementia was taking hold, Mum self-published her memoir, “Growing Up with Maryon and Mike.” Including as it does Lester B.’s letters home to his wife and children from Canada House in London, during The Blitz, it stands as a piece of Canadian history. That mattered to her.

For the last several years of her life, she and we did our best in the face of the implacable erasure that is dementia. It was a difficult journey, cruel, bizarre, sometimes comical, yet magical too in a way. Such grace and courage Mum showed.

Thanks to the staff at Vermont Square and Lakeside LTC, who adored Patricia and showed her the care and respect that all LTC residents deserve. PSWs are unsung (and underpaid) heroes in our society, and deeply appreciated by loved ones.

To PSW Richard Brydson, our great thanks. He and Pat began their time together in 2013, she as his first client. Over the next 6 years, they formed a deep bond and he became part of our family. Richard didn’t only hold her hand on the journey, he sometimes held ours.

In some ways Patricia left us long ago, but we will still miss her dearly. Mum, you’ve earned your final nap. Godspeed.

We will hold a celebration of Patricia’s life on Sunday, June 16, 2019 at the Victoria College Chapel (within the U of T Campus at 91 Charles St. W., Toronto) A reception will follow in the Alumni Foyer. A private burial alongside her parents, brother, and niece will take place in Wakefield, Quebec.

Please share in your favourite memories, sentiments and photos of her life here at her memorial webpage.

A Celebration of our Mum