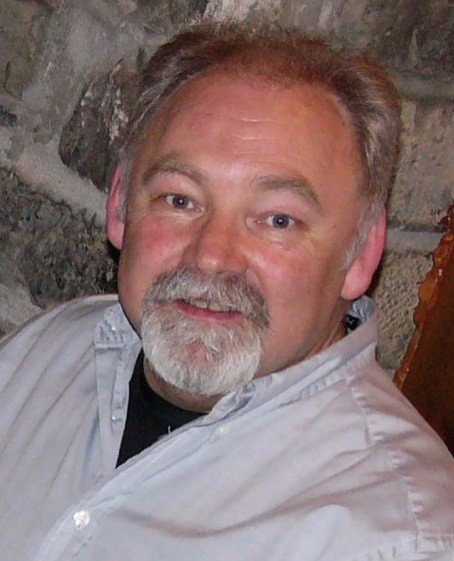 NOTICE: In light of the ongoing concerns over public health and limited gatherings, the responsible decision to postpone David's memorial gathering has been made, until further notice.

When safe to proceed, details will be announced here and we hope that you'll continue to share thoughts and memories of him on this site in the interim.

Quietly, with dignity and grace, David left us in his 65th year on February 5, 2020. He died in the arms of his wife, Maxine, surrounded by family and friends, at Kensington Hospice in Toronto. He was predeceased by his parents,Tony Humiski and Grace Florence Barnett, and sister Jeysoca Kardell. David also continued to mourn the loss of his beloved dogs, Spike, Miss Laicey and The Duke. David is survived by Maxine, sister Evelyn, nephew Harrison, many other beloved nieces and nephews of Maxine's family, and his Manitoba cousins. David also left behind a wide circle of friends who adored and respected him as a special guy.
David grew up on the Manitoba prairie. In 1982 he moved to Toronto to further his media career and was hired as a director at Channel 47, the multicultural channel. He then spent 30 rewarding years as a photojournalist with CTV News in Toronto, before retiring two years ago. A true professional, David had the uncanny ability to help his subjects feel relaxed and comfortable in front of the camera. David befriended virtually everyone who crossed his path - from shopkeepers to heads of state. He had a gift for listening, along with an insatiable curiosity. His eclectic interests ranged from all types of music, religions, cultures, architecture, art forms, and cars. He was also an avid collector of Frisbees, vintage TV show cards, wine, Cuban cigars, coins, media badges and much more!
Friends and family fondly remember David as a humble, classy, honourable, charismatic, warm, loving and hilarious guy. His spirit and footprint will live on in those who were profoundly touched by him. He was a very good man.
"The greatness of a man is not in how much wealth he acquires, but in his integrity and his ability to affect those around him positively." Bob Marley
Cremation has taken place. A 'Memorial Gathering To Honour David' will be held on his birthday, May 1st, 2020. For details announcing this event and to make donations, share memories, stories and photos, please  visit his memorial web page at www.ecofunerla.ca. We gratefully acknowledge the incredible staff and volunteers at Kensington Hospice who made David's final days the best they could be. If you wish, please consider a donation Kensington Hospice, via his memorial web page.